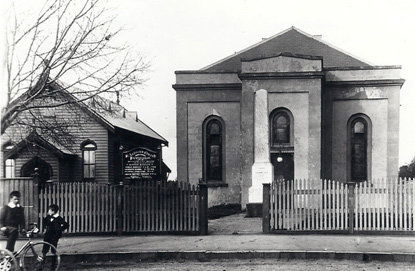 After the first Presbyterian Church service was held by an ordained minister at Dr Thomson’s station in 1837, there came a push for establishing the Presbyterian Church in Geelong. Services continued to be held in Dr Thomson’s shed, including services conducted by the Rev. James Forbes. He was also partially responsible for the arrival of the Rev. Andrew Love and his family on 9th April 1840, having written to the General Assembly of Scotland seeking a suitable preacher for the Geelong Area.

Building works commenced in early March 1841 on the high ground at the top of Yarra Street on the east side.  The contractors for the work were R. Somerville and R.H. Marr.

The Building of the Church

The foundation stone was laid on Monday 22 March by Dr Alexander Thomson. Beneath the stone were placed newspapers, coins and the following statement:

In the name of the Blessed and Glorious Trinity the foundation stone of this edifice (the first place of worship erected in the district), to be known by the name of the Presbyterian Church of Geelong, in connection with the Synod of Australia, was laid 22nd March, 1841.  The Reverend John Tait, Moderator.  The Reverend Andrew Love, Minister of Geelong. Trustees: Alexander Thomson, David Fisher, Jonathan Clerke, George Mercer, Hugh Murray.

According to W.R. Brownhill, there was a long delay in the completion of the construction, due partly to the fact that a fault developed and a portion of the walls had to be re-built.

The property now known as St John’s Lutheran Church, 165 Yarra St is included on the register of the National Estate and Victorian Heritage Register, The Statement of Significance reads:-“The former St. Andrew’s Presbyterian Church, Yarra Street, Geelong, was designed by the architect/surveyor Alexander Skene and erected in 1841/42.  The building was simple, Georgian in style and rectangular in plan, with a small entry porch at the Yarra Street end.  Polished freestone sills were used at the doors and windows but the walls were constructed of locally manufactured bricks.  Other materials, including some of the roofing shingles and plaster for the ceiling, were imported from Hobart. The original structure survives but is now behind a two storey rendered Classical style front that was added in 1912-13 to the design of notable Geelong architects Laird and Buchan.  This followed the purchase of the Church by the local Geelong Scottish Society, the” Comunn Na Feinne”. The structure was remodeled as a hall for meetings and the various entertainments.  Despite internal alterations and the external rendering of the 1841-42 building it retains the utmost historical significance and together with its 1912-13 additions is important in being:

2.The oldest surviving masonry structure in the Geelong region.

3. The oldest church building outside of Melbourne still being used as a church”.

Because the property known as St. John’s Lutheran Church, 165 Yarra Street, Geelong, Victoria, is included on the Victorian Heritage Register and as a heritage overlay on the City of Greater Geelong Planning Scheme, there is an obligation to refer works for heritage and planning permits.

In 1911 it was resolved that Presbyterianism in Geelong was unsatisfactory because of the close proximity of the Presbyterian churches within the city area.  This led to the closure and sale of St. Andrew’s Church in Yarra Street in 1911-12, after a new church had been built in Sydney Avenue, East Geelong.

The Scottish Society known as the “Comunn-na- Feine” was instituted in Geelong in 1856 for the cultivation of the Gaelic language and Highland nationality, philanthropy, archaeology, &c. In 1912, the Comunn- na- Feine Society moved to its new headquarters to the former St. Andrew’s Presbyterian Church, Yarra Street. The building was used for meetings and various forms of entertainment, including musical and elocutionary competitions. Marjorie Lawrence, then a promising young singer and in the years afterwards a world-renowned principal in opera and other musical works, made her first Geelong public appearances at the Comunn-na-Feine competition. She won several singing events, including the aria from grand opera. Marjorie Lawrence won her first singing competition in this building.

After the removal of the original front porch, a two storey pavilion addition at the front was characterised by a central projecting single storey portico supported by round paired Doric columns. An elaborate pressed metal ceiling in the original Church hall appears to have been introduced over the early lath and plaster ceiling as part of these alterations. A kitchen was added to the north and an ante room to the south along the east end of the hall, completed by January 1914.

Further additions and alterations were carried out in 1922. These changes included the addition of a stage to the east of the original hall, and additional toilets  to the south of the stage area.    During the period between the two world wars, the Society began to struggle in maintaining satisfactory membership levels and public interest in events. Further disinterest brought about the end of the Commun-na-Feine Society after the end of World War Two in 1945.

Lutheran services were held at various locations in Geelong commencing in 1902 conducted by Pastor Heyer mostly at the home of Mrs Hartwick. Later Pastor LG Schulze held them at a home in McKillop St. During the period 1908 to 1912 services were transferred from McKillop St to the Sailors Rest building. At the start the First World War, services were held in members’ homes. Following the war the church moved to the Central Hall in Ryrie St. On 18 February 1923 at a meeting at the Grovedale Trinity Church, it was decided to form a branch congregation in Geelong.  Peaceful dismissal was granted by the Grovedale Trinity Church to members of the branch congregation on 19 March 1925. It was at this time when a new self-governing Lutheran Church began in Geelong, known as St. John’s Lutheran Church. On 4th June 1925, the first two elders were appointed: W. Hoffmann and E. Koenig.  Between 1925 and 1946, St. John’s Church held services and annual meetings at the Central Hall.

The first Lutheran Church service in the Yarra Street church (formerly St. Andrew’s Presbyterian Church and the Comunn-na- Feine hall) was held on 25 August 1946, in the presence of a large congregation.  In the following year a youth convention was held in the Church, and the place was dedicated for Lutheran worship on 4th of April 1948.In 1949, the Trinity congregation at Grovedale was dissolved and most of the members transferred to the Yarra Street church. The growth of St. John’s Church was certainly substantial during these early years, and by 1962 the first 47 students commenced at St. John’s Lutheran Church School at the corner of Aberdeen and Pakington Streets, Newtown.

It was in 1946, after the first Lutheran Church service in the former Comunn na Feine hall when noteable alterations were carried out, to provide the necessary facilities for worship.  An internal wall was introduced along the eastern end of the hall (closing in the stage) and a pointed arched niche was constructed in which was placed a timber altar in 1947. The timber pews were also introduced about this time, as were the pulpit and altar.

Later Changes and Additions Church Building In 1950, a Kilner organ was purchased and introduced into the church at a cost of £1344.10/-[i]  Seven years later in 1957, the timber balcony was added along the west end of the Church, increasing the accommodation capacity. In December 1972, the existing Alfred Fuller pipe organ was dedicated at St. John’s. The tracker-action organ of two manuals, 20 stops, three couplers and 1200 pipes had originally been built in 1886 by Alfred Fuller in the Methodist Church, North Melbourne.

In 1985, internal alterations were carried out to the foyer of the front two storey pavilion. These alterations included the introduction of a concrete slab floor and the removal of some internal walls to create larger openings.

1839- Documents prepared for the Presbyterian Church – Colony  of New South Wales for construction of a Church in Geelong.

1912-13   Church purchased by the Commun na Feinne Society and converted into a hall. Plans prepared by Laird and Buchan architects for a two storey extension to the front and side kitchen. Ceilings in Church added and walls plastered.  Many dances and concerts held in the hall. Notable is the fact that Marjorie Lawrence, celebrated operatic mezzo-soprano won her first competition here.

1922 – Rear hall (stage) constructed to a design by Laird and Buchan architects.

1946 – Lutheran Church purchased the building in May for the sum of $6,300 and returned the use back to a Church. The first Lutheran worship service was held 25th August 1946.

1957 – Balcony added to the Church to increase internal accommodation room. 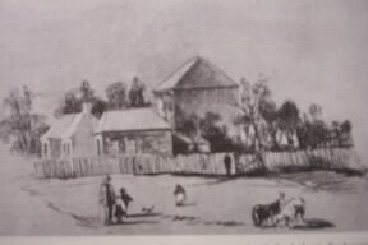 Painting displayed in Geelong Art Gallery of St Andrews Manse & School at left of picture looking West in McKillop St with church building on the right.